Last month I was invited to a get-together and asked to help the mother of the host prepare the food  for the buffet. She lives in a little wooden house at the back of a garden centre and you have to follow a winding stone path, ducking under low tree branches to find her. The house is just the right size for two people and the garden is enchanting. She has fruit trees, a vegetable patch, a pond… I live in a horrible suburb of a city so when I see something like this, it’s like stepping into another world.

Anyway… we finally finished preparing the salads and dips and her son came to help me carry all the food to the buffet. “Don’t forget the potatoes in the bed,” she said. And I thought “Huh?” and only realised what she meant when her son went into her bedroom and pulled a giant pot of potatoes from under her featherbed where they had been keeping warm.

I suddenly remembered this scene because last week I was skimming the internet for a few vegan crockpot recipes and one link led to another and then I saw the “Wonderbag.” This is a glorified bean bag with a cushion on top which is used by many families in South Africa to save valuable heating fuel and prevent health problems caused by breathing in smoke for a long period of time.  If you’ve never heard of it, here’s a link with more information: http://www.youtube.com/watch?v=3JcaOIv2L5o

On the UK internet site that is selling the Wonderbag (http://nb-wonderbag.com), the Wonderbag costs around 30 GBP + 8 GBP for postage and packaging. One will be donated  by the company  to a South African family for every Wonderbag sold in the UK.

The cost of a Wonderbag and packaging to Germany would set me back 65 GBP (81 Euro).

The high cost and the fact that the Wonderbag is filled with  recycled polystyrene balls, which won’t biodegrade, mean that I won’t be buying this product.

Heat retention cooking is nothing new. In the past hay boxes were used or food was placed in a bed and covered with a featherbed. YouTube has a few videos of people using washing baskets filled with sleeping bags and blankets to help retain heat in cooking pots and although I’m sure this works beautifully, I don’t find it very practical in the long term.

So I searched for an alternative to the Wonderbag that I can buy in Germany. Here it is – the Kochsack:

The downside of this product is that a cover costs extra (I didn’t order one) and the choice of cover designs is not as colourful as those offered for the original Wonderbag BUT – and this is the most important aspect for me – it is not filled with non-biodegradable polystyrene balls. Instead the company uses feathers and down as insulation in the Kochsack. No, it’s neither duck nor vegan friendly  to use feathers but I still prefer this to polystyrene… I ordered the Kochsack online from the world’s largest bookshop and the total cost was 35.99 Euro (around 29 GBP).

My Kochsack arrived today and it is ginormous! The quality is brilliant. From the photo on amazon, I didn’t think it would be as big as the Wonderbag but it definitely is. If it does get drips and drops from a saucepan, then all you need to do is pop it in the washing machine and then the tumble dryer and it’s clean again.

The first recipe I’m going to try is a Jamaican bean stew from the Savvy Vegetarian site (http://www.savvyvegetarian.com/vegetarian-recipes/jamaican-red-bean-stew.php) but I’ve changed the ingredients to suit what I have in the pantry and fridge so I don’t have to go shopping. 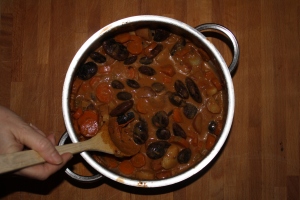 How to prepare (The Theory)

I’m being a bit careful with the giant red Hungarian beans because of the toxins that they may contain if they are not cooked long enough. I added all the ingredients for the stew to a pot, brought it up to a boil and cooked it for 20 minutes to be on the safe side. It is important to fill the pot almost to the top when cooking in this way.

I’ll measure the temperature after a few hours to make sure it has not fallen below 60 C. If it has, I’m going to heat the stew up to around 74 C to kill any bacteria that may have begun lurking.

THE RESULTS OF MY FIRST EXPERIMENT IN THE KOCHSACK

Temperature of stew when placed in the Kochsack: 96 C

Temperature of stew after 3 hours 20m  in the Kochsack: 67 C

The giant beans were as hard as rocks. I should have known.

I remedied the situation by fishing all the giant beans out of the stew, putting them in the pressure cooker with water to cover and bringing them up to a rolling boil. Under pressure I cooked them until they were done and then re-heated the beans and the stew before replacing the pot in the Kochsack which I’d optimised (see Plan B below).

The aim of the Kochsack in my household is to get food on the table for when I’m teaching and my husband and the children need a warm lunch. This is especially the case in autumn and winter. I’d like to cook the ingredients for 10-15 minutes on the stove (vegan recipes) and then allow the stew/soup/whatever to “cook” so that everything is still lovely and warm when they lay the table for lunch.

I realise that they will still have to warm the pot briefly on the stove, but I consider a loss of around 33 C after 3.5 hours isn’t too good for my initial attempt.

Why don’t I just give up you may ask? Well, the texture of the potatoes and carrots was lovely, no trace of mushiness, the watery sauce in the beginning had turned into a lovely creamy sauce. 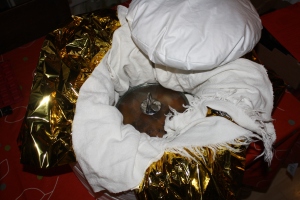 Using a space blanket in the Kochsack to improve insulation

While my beans were cooking, I lined the Kochsack with half of a gold/silver space blanket (2.99 Euro from the local DIY store) and replaced the table cloth on top of this.  I noticed while the stew cooked for the first 3 1/2 hours that the sides of the Kochsack stayed cold but the bottom was luke-warm and had a little condensation from the pot. Before attempting my first dish in the Kochsack, I did consider placing the space blanket at the bottom of it, but I wanted to first test how well heat was retained without the space blanket.

A souvenir from our summer holidays at Lake Balaton

I’ve learned from my mistake today. In future when I make this dish (maybe with pumpkin chunks next time), I’ll pressure cook the beans and then add all the other ingredients, cook for 15 minutes and then place everything in the Kochsack. Or I’ll just use tinned beans, but honestly, once you’ve tried these beautiful, giant, red, veined Hungarian beans, you’ll never go back to silly tinned kidney beans.

Plus I have Lorna Sass’ book “Great Vegetarian Cooking Under Pressure” which contains only vegan recipes. It’s a great book, especially if you love beans and other pulses as much as I do, because it shows how quickly you can pressure cook pre-soaked beans. Since I bought the book, we eat beans and pulses more often.

I'd love to hear from you! Cancel reply

Websites related to cooking with the Thermomix