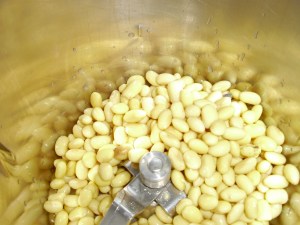 I don’t know about you, but I find the taste of commercially bought soya “milk” rather like liquid plastic. During the last few days I have spent the rest of my precious holiday time thumbing through some absolutely brilliant vegan cookery books and soya milk seems to crop up a lot as an ingredient. I’m not planning to use soya products that often in the kitchen, but if I do use them, I’d like to produce them myself.

So yesterday I went shopping for soya beans and bought 1 kg of GM-free, yellow soya beans for my first batch of soya milk. The soya beans cost me 4,99 Euro, so they aren’t that expensive. I ended up making 2.4 litres of soya milk, 2 litres of which were then transformed into 400g of tofu, the remaining 400g I used for Chai tea. I was left with 2 cups of okara after pressing out all the soya milk and I used the soya bean residue to make 10 soya burgers. And all that for 1 Euro plus a few cents for 2 tsp of calcium sulphate which I bought from the local chemist.

I’ll start with the recipe for soya milk which I found on the German Thermomix forum http://www.wunderkessel.de. It was posted by a certain Inka and I’m grateful to her for posting the recipe.

I made this in two batches in the Thermomix because it only holds 2 litres.

Soak them in water for 8 hours, then drain and rinse the soya beans.

For the soya milk: 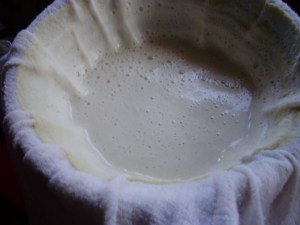 1. Pour half the soaked, drained and rinsed soya beans into the TM bowl and mix for 10 seconds on speed 10. You’ll end up with a fine, yellow powder.

3. After that you’ll need to mix the milk for about 2 mins at speed 10. A word of warning: the milk is very hot at this point, so gradually increase the speed during the 2 mins up to speed 10. The milk may splutter during mixing.

4. Pour the milk through cheesecloth in a sieve with a bowl underneath. The okara (pureed soya beans) stays in the cloth. You’ll need to twist the cloth, draining every drop of soya milk into the bowl. Set the okara aside for the soya burgers if you’re making them.

Repeat the recipe for the second batch of soya beans and then admire your Thermomix soya milk. I had about 2.4 litres of soya milk.

I'd love to hear from you! Cancel reply

Websites related to cooking with the Thermomix